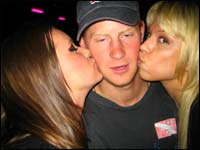 The story of Calgaryâ€™s very first Royal couple Prince Harry and Cherie has become the hot topic at water coolers and Starbuck line ups all across the city. And thanks to Bartender Cherieâ€™s obsession with becoming famous, the motto that most of us Calgarians live by of â€œWhat happens in Cowboys stays in Cowboysâ€ has been shattered. And with a mere few weeks till Stampede the effects of Cherie-gate will surely be felt citywide.

Over the past couple days of heard all sorts of people arguing over whether or not Cherie was right by going to the media. I mean, sure who would turn down $30,000? That is at least a couple months of rent in Calgary! But at the same time, the reason Harry probably came down to our city was to enjoy a little of the anonymity that he has never had in England.

But me? I donâ€™t feel bad for either of them. Nope, the ones I feel bad for are the other bartenders and waitressâ€™ of Cowboys. For years they have been prime examples of an excellent moral fibre that so many of todayâ€™s youth are missing. By Cherie going to the press with sordid details of what went on behind closed doors, it can only lead to other people thinking that the girls of Cowboys are willing to show off their bodies for just a little attention. Next thing you know theyâ€™ll be forced to pour shots down their breasts and then rub them in the faces of newly minted 18 year olds and past their prime 35 year olds! Itâ€™s just not right. These girls are just like our sisters. I mean donâ€™t we all have sisters who wear tight black lingerie to work? No? Itâ€™s just me? Hmm.

Either way, the girls of Cowboys are hardworking professionals who are dedicated to providing an atmosphere that is both enjoyable and comfortable. That down home feeling. What with the reasonable priced drinks and what I can only assume are failed Stampede wrestlers for bouncers, Cowboys represents the little kid in all of us, but with big fake breasts. Ahh childhood.

So before you get all caught up in the gossip and Cherieâ€™s pictures letâ€™s not forget the victims in all of the thisâ€¦â€¦â€¦anyone under the age of 18! Now where is my Boob Shot!