A Nightmare before Seaweed 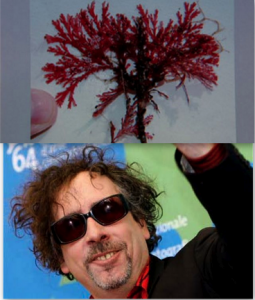 I’ve always said, you haven’t lived until you have seaweed named after you.

Okay, I haven’t always said that, but I am now. Luckily for director Tim Burton he doesn’t have to worry about that any more!

A researcher at the University of New Brunswick discovered a new species of seaweed and got to name it herself. Â So what name did she pick? Euthora timburtoni.

Bridgette Clakston told the CBC , “I decided to name this new species in honour of film director Tim Burton because I grew up watching and loving his films, and I think they had an influence on my imagination.”

While she says it is because of his “influence”, I’m betting it had more to do with their similar “looks”. Â While Burton has responded to his new honor, I’m hearing rumors that he already trying to find his own new species of seaweed to call Euthora helenabonhamcarteri.