A handy guide to making the most of the mountains...

Presented in Partnership with Travel Alberta

And one of my favourite things about spring, especially here in Alberta is that thereâ€™s a chance that you can really enjoy all four seasons in a matter of days, sometimes in the same days. Thereâ€™s still lots of snow to be found in the mountains, but down in the towns, the warm sun often shines, offering up the chance to explore pathways and stroll that have spent the better part of the last six months buried under the white snow.

So with the days getting both warmer and longer, here’s my handy guide of ways for you to enjoy the mountains this spring like never before! 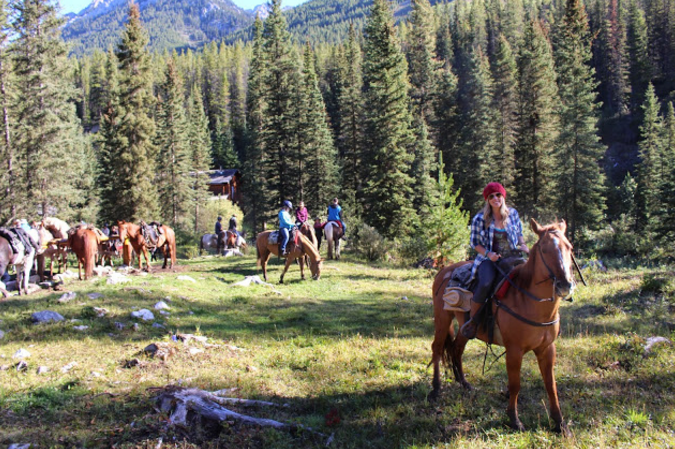 Some of the areaâ€™s first mountaineers did it by horseback, which makes Banff Trail Riders a unique way of exploring Banff National Parkâ€™s history. The Bow River Ride is an hour long and features a tour along the Marsh Loop, past the historic Cave & Basin, along the Bow river, featuring stunning views of Mt Norquay and Castle Mountain. The one hour rides start on April 30th, with the rest of the trail rides starting the first week of May. If youâ€™re looking for a bigger adventure, I definitely recommend the overnight trip to Sundance Lodge, which is incredibly peaceful and gives you an unforgettable way to experience the parkâ€™s wonderful backcountry.

The weather in the rockies can sometimes be unpredictable, unless your six stories deep inside of a mountain that is. Ever since I did my first caving experience last year with Canmore Cave Tours, Iâ€™m convinced itâ€™s one of the most thrilling adventures in the rockies, and the fact that youâ€™re safe from the snow is an added bonus! Thereâ€™s a couple of different experiences including the Explorer Cave Tour, which allows you to spend two hours climbing, pushing, squeezing and sliding your way through Ratâ€™s Nest Cave. Thereâ€™s also the Adventure Cave Tour which features an epic repel and a few tighter squeezes. If youâ€™re looking for an unforgettable experience this spring, this is it! 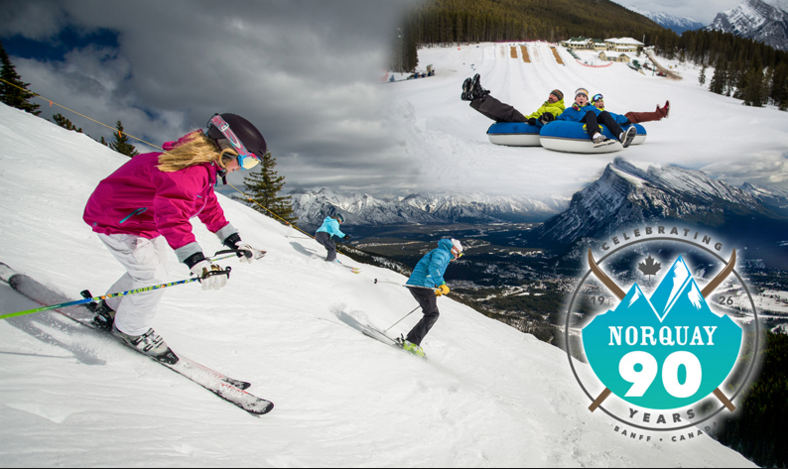 Just because itâ€™s the spring, doesnâ€™t mean the snow has stopped falling. In fact, the Rocky Mountains is well known for offering up some of the best spring skiing in the country. And on April 6th, you can hit the slopes for only 90 cents. No, thatâ€™s not a typo. As a part of Mount Norquayâ€™s 90th-anniversary, theyÂ are offering Alberta residents 90 cent day lift tickets. The deeply discounted lift pass is available on April 6th, with an optional donation to a local charity of Mt Norquayâ€™s choosing. Whether youâ€™re an expert skier, or just wanted to finally try the sport out, you canâ€™t really go wrong with 90 cent lift passes. While youâ€™re there, make sure you warm up with a delicious meal atop Mt. Norquay at the The Cliffhouse Bistro, which offers up the best views in Banff. 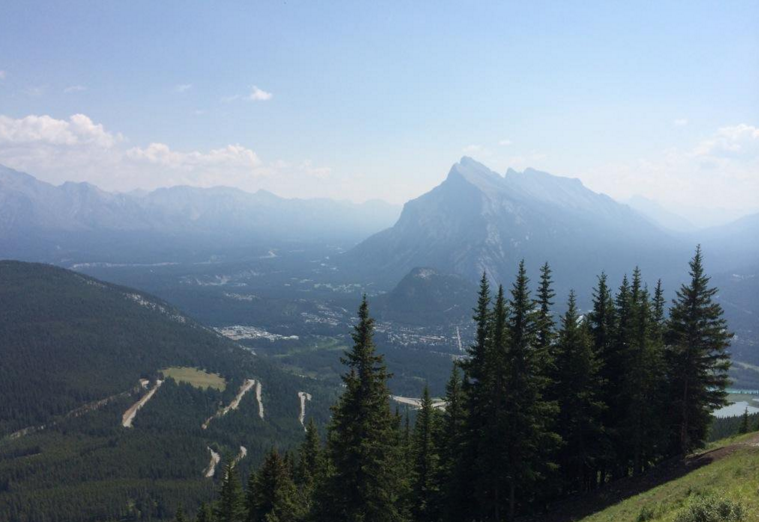 Hippity Hop on the Mountain Top 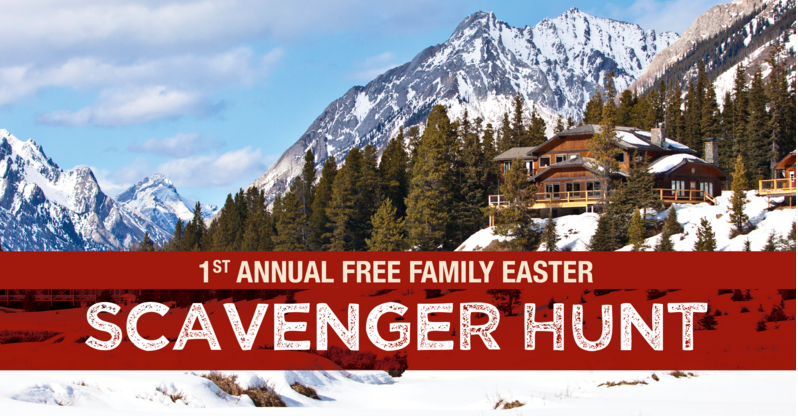 Celebrate the Easter holiday by heading to the rockies and visit one of the provinceâ€™s most beautiful back country lodges, which is easily accessible by car. While youâ€™re there, making sure you check out Mount Engadineâ€™s 1st annual Free Family Easter Scavenger Hunt. Families will be treated to an exciting scavenger hunt! With the picturesque mountains as your backdrop, kids will be able to get into character and have their faces painted and roast marshmallows over the campfire. Enjoy a BBQ of Homemade Pulled Pork and Portobello Mushroom Burgers with a cash donation to the Bow Valley Food Bank. Event takes place from 1pm to 5pm. 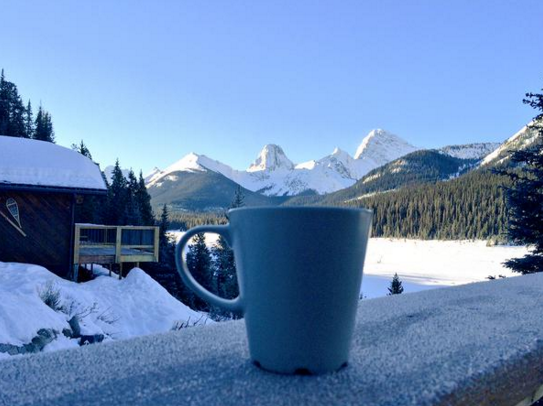 If you miss Mount Engadineâ€™s Scavenger Hunt, do be sure to check out their daily
Afternoon Tea everyday from 2pm to 5pm! The good news is that you donâ€™t have to be a guest of the lodge to enjoy fresh baked goodies, fresh fruit, fine local meats and refined cheeses. Although you really should book a room there too. Thereâ€™s really no place like it! Theyâ€™ve also introduced Strudel Sundays, which, unsurprisingly features strudels served on Sunday. Theyâ€™re available from 2pm to 5pm or until it’s sold out. If youâ€™ve never visited Mount Engadine, add it immediately to the top of your Spring Must-Do list!

Canmore Uncorked is 12 day-food and drink festival featuring special set-price menus from some of the townâ€™s most amazing restaurants, incredible culinary events, progressive dinners, cooking classes and more. And by â€œmoreâ€, I mean a wine festival featuring more than 100 different wines from all over the world!

The Canmore Uncorked Wine Festival takes place on April 16th and runs from 2pm-5pm and then 6pm-9pm.Â Tickets are $45. 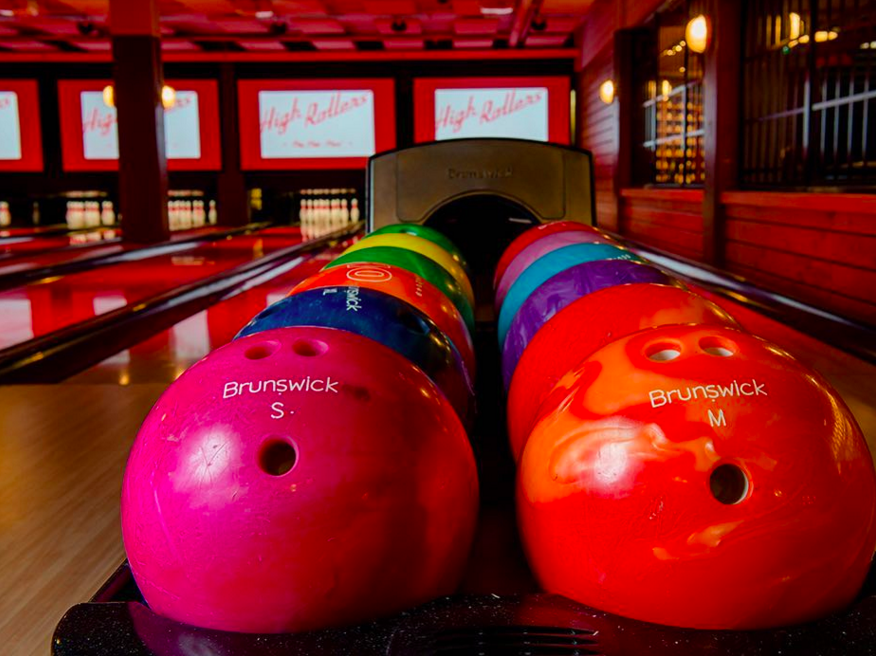 Pins, pints and pizza, oh my! Every time I visit Banff, I like to pop into some of my favourite spots, including, Eddie Burger Bar, The Grizzly House and The Banff Sweet Shoppe. But now Iâ€™ll have to add High Rollers to the ever-growing list. Itâ€™s a new beer hall with bowling lanes, which has opened up right Banff Ave. Itâ€™s actually right down the street from other great new spots along Banff Ave, including Park Distillery Restaurant and Bar and the funky Banff Provisions General Store.

Look up, look waaaay up, now go down!

I have three words for you: Canyon. Rappelling. Trips! If youâ€™re looking for something new and a great way to enjoy the outdoors, it probably doesnâ€™t get better than this new experience from the crew at Rocky Mountain Canyoning in Jasper. Later this spring, you’ll have theÂ chance to see some of Jasperâ€™s most scenic canyons like never before. Youâ€™ll have the chance to rappel down the area’sÂ steep-walled gorges and rushing waterfalls in an adventure your friends will be instantly jealous of. When the weather warms up a bit, there will be two tours available. The Two Valley Canyon takes 4-5 hours and the Morrow Canyon takes six hours and features rappels up to 15 meters!

One piece cardboard to rule them all!

If you enough trouble getting down hill on skis, maybe itâ€™s time to give up and give a cardboard box a try! And by the looks of it, Lake Louiseâ€™s Cardboard Box Downhill Derby might be yourÂ chance to give it a try! This free event ask participants to get creative with cardboard, string, tape and glue and put their carpentry skills to use! Teams of 1-4 can participate, or you can just sit back and enjoy what is sure to be a hilarious event!

If youâ€™re a fan of Matthew Barber and Jill Barber, this is your chance to see the siblings on stage together, which doesnâ€™t happen that often. Both musicians have carved out their own niche in the music industry and when they take the stage together, itâ€™ll be a concert that you wonâ€™t want to miss. The evening will feature a collection of songs written by the renowned Canadian siblings and songs by the likes of Neil Young, Leonard Cohen, Ian Tyson and more. If you do check them out, make sure you check yourself into the Banff Centreâ€™s hotel, which is offering a pretty great overnight deal. $190 gets you two tickets to show, one nightâ€™s accommodation, and breakfast for two. Whatâ€™s really great is that The Banff Centreâ€™s hotel is just steps away from the Eric Harvie Theatre. The show takes place on April 17th.

Getting slushy with it! 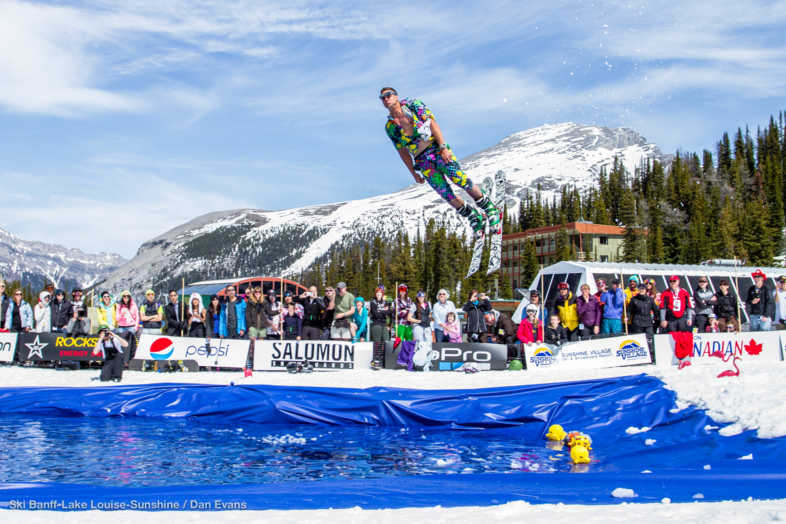 Thereâ€™s a reason Sunshine Villageâ€™s Slush Cup will be celebrating itâ€™s 88th annual competition this year, thatâ€™s because thereâ€™s nothing quite like it in the rockies! Slush Cup is a competition where participants ski or snowboard down a run into an icy pool of water, with the goal of making it across to the other end on the pool. As someone who judged this event last year, I can tell you that most participants donâ€™t make it across, which is definitely part of the fun! The Slush Cup takes place on the Sunshine Villageâ€™s last day of the ski season, making it the perfect way to say goodbye to the slopes for a few months.

Congrats to the winner of today’s #SlushCup at @SunshineVillage! He nailed his landing!! pic.twitter.com/6GleElPSnS