A Day At The Opera 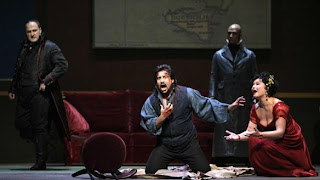 This may come as a surprise to most but I’m pretty classy. Take today for example, I went to the Opera. That’s right, the Opera. Okay…well…it wasn’t really the Opera. I went the movies and they showed the opera. That’s the same thing right?
Since I’m still in Montreal and my granny and I ran out of things to talk about two days ago, we decided that we would go check out Puccini’s Tosca at the Cineplex theatre here in town. It’s actually quite cool because the show is actually a live broadcast of the performance from the Metropolitan Opera, so we are seeing it at the exact same time as those NYC snobs who probably paid hundreds of dollars for tickets. I think I thought they were going to show us a DVD of the show or something like that, but it was indeed very live and in HD. And apparently these shows are no secrets, the theatre in Montreal sold out three screens showing Tosca! That’s about 1000 people. And that was just at one theatre in Montreal, apparently the show was screen in over 45 countries today!
If I’m sounding like I actually thought the opera was cool, it’s because I did. And I really didn’t think it was going to be. Especially considering the fact that I was the youngest person in the theatre by at least 50 years. You may chuckle because you think I’m joking, I assure you, that I am not joking. Actually, I wasn’t the only one that noticed how young I was. Everyone there pretty much thought I was working for the theatre, throughout the afternoon I became an official Cineplex concierge: directing people to the bathrooms, back to their seats, away from the emergency exits and even to their cars.
The Opera stars Karita Mattila, Marcelo Alvarez, George Gagnidze and since they’ve never been on GLEE, I have no idea who they are. But apparently they are pretty hot shit. Plus if you’ve never seen an opera or your Italian is a little rusty, have no fear, the theatre provides you with a full synopsis of the performance before it starts. And yes, there are even subtitles. Think of it as Opera for Dummies. Or just me. A really cool added bonus is the backstage footage. During the show’s two intermissions, they interview the actors immediately after they walk off the stage. It really is a rare backstage look at what goes into doing an opera. Be warned though, the intermissions are about 30 minutes each. Which means most of your afternoon will be eaten up by the four-hour combined running time.
The next Metropolitan Opera at the theatres is going to be AIDA on October 24th, I kinda think I might check out that one too. The Opera plays about once a month at most major cineplex theatres.
And lastly, and I can’t emphasize this enough. If you decide to go, don’t rush out to the parking lot after it is done. Take your time. Because I’m telling you now, nothing and I mean nothing, is more terrifying than 1000 senior citizens trying to drive out of a parking lot at the same time. Don’t say I didn’t warn you.