A cornocopia of guilty!

On a fateful Saturday night, while wearing sweatpants and a dress shirt, destinies were alligned, planets circled other ones and in a tiny apartment in downtown Calgary one man threw in a DVD that would forever change his life, well at least until, umâ€¦I donâ€™t know, around lunch timeâ€¦letâ€™s say on Tuesday. But it was still cool. During this fateful night he..ok it was me. Letâ€™s stick with the 1st person shall we. Anyway, so I was home wanting to watch a movie and enjoy some Salt and Vinegar popcorn. Scanning my selection I had a hard time deciding what to watch with said popcorn. V for Vandetta? Depressing. Thank You for Smoking? Too Political. I needed something light, funny. And then I saw it: Canâ€™t Hardly Wait. Still in itâ€™s packaging too! Score! I bought it at Walmart like 5 months ago for $5 and havenâ€™t had the chance to re-watch this movie that essentially defines my high school years.

I having seen this movie for at least 7 years. A lot in my life has changed since then, but after watching this movie, my love for this movie has apparently not. But why? This movie hardly has what I would call a script, and the way Jennifer Love Hewitt laughs/sighs at the end of every sentence reminds of why I had to stop watching Party of 5 and why I was president of the â€œI will not watch Time of Your Life groupâ€ on Facebook.

It didnâ€™t take me long to realize why this movie was so appealing to me. It hits all of my â€œGuilty Pleasureâ€ buttons. Has anyone watched this movie lately? Pretty much the entire line up of any TV show ever is in it. More specifically every TV show youâ€™ve ever loved, but were too scared to admit to certain people.

Letâ€™s look shall we?

Leslie Grossman: Mary Cherry from Popular. If I had known about this show when it was on, I truly believe my life would be different.

Sara Rue: Speaking of Popular she was in this, but I had a secret obsession with â€œLess than Perfectâ€. I have the doctor looking into it.

Melissa Joan Heart: Sabrina the Teenage Witch was never really a big â€œTo Watchâ€ on my list, but it reminds me of â€œBoy Meets Worldâ€ and thatâ€™s ok by me.

Selma Blair: Sheâ€™s actually in two of my guilty pleasures. Cruel Intentions and The Sweetest Thing. Iâ€™ve been terrified of bathrooms with holes and picnics in Central Park repectively ever since. But in the good way, you know?

â€œDu Jourâ€: Du Jour you say? Who are they? Well this one is a strech, but they were the male counter parts to Josie and the Pussy Cats. (Seth Green, Breckin Myer, Donald Faison and Alexander Martin) Thank You IMDB.

The Cast of Buffy: Well not the entire cast of Buffy the Vampire Slayer but a good chuck. The following people all appeared in Canâ€™t Hardly Wait and Buffy in some form or another: Seth Green (Oz), Amber Benson (Tara), Paige Moss (Veruca the Werewolf), Clea Duvall (the invisible girl). Please note that Amber only appears once in the movie, staring at a banana. I wasnâ€™t sure, but watched it a couple of times and itâ€™s defiantly her.

Jason Segal: Marshall from How I met you Mother. If my Mondayâ€™s werenâ€™t already full, this show would defianatly be a bigger priority.

Jaime Presly: Currently on â€œMy name is Earlâ€, but itâ€™s nice to see that everyone has to start some where and say lines like: â€œBut he is totally the most dope guy in school!â€ (actual line)

There are more, but I think you get the point. I also realized that I didnâ€™t know a lot aboutâ€¦well a lot when I first say this movie. But Iâ€™m happy to announce that at the age of 24, I now know what a Jimmy Hat really is. Thanks Oz. 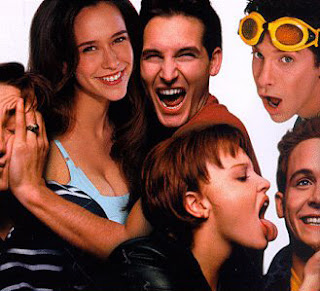