A conversation with MuchMusic’s Jesse Giddings 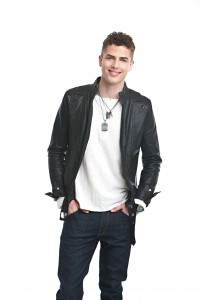 With just over a week until the MMVAs take centre stage, I got the chance to sit down with one of MuchMusic’s newest VJs Jesse Giddings and talk about about Canada’s craziest award show.

Okay fine, we were supposed to talk about the MMVAs, but I really wanted to know how here got here. How he got to be a VJ and mostly, how got to be so freaking cool. (Obviously, I could the help.) Since he used to be model, you wouldn’t be a bad person to think he’s gotten this far just on his looks. But over the course of our lunch, Jesse filled me in on what has already been a life full of adventure and even some failures.

You first have to realize that he is not your typical VJ. Giddings always knew he was creative. Whether he was designing shoes as a 5 year old, or convincing his high school principal to let him turn an empty classroom into a store so he could sell his own clothing line. After high school he joined a couple of bands in Calfornia, then decided he wanted to be youth director so went back to school. Â Thanks to his parents, music has always been in his blood, soÂ then he created a youth centre that doubled as an alcohol and drug free concert venue for teens. Geddings credits his parents for being the reason that he feels so comfortable taking risks.

To give you an idea of how far he has come in two years, last year he was working on the oil rigs trying to make enough money to make the move to Toronto. Once he finally made it, he set his sites on becoming a VJ. He went to the Open Casting call and nine months later, there he was: MuchMusic’s newest and probably coolest VJ.

Working with youth is a reoccurring theme in his life and even though is a VJ he doesn’t see that changing anytime soon. He gushes as he talks about interacting with MuchMusic fans and loves when he gets the chance to interact with them in person or online and talk about music.

And you can’t talk to Jesse without talking about music. He admits that his favourite bands are more independent then the ones he pitches on Much, but he was happy to share some of them for us to discover!

Some of Jesse’s favourite bands include:

Over the past couple of years, Muchmusic has obviously made a huge effort to make their fans feel apart of the network. Â Whether they are hosting the Red Carpet at the Junos themselves or hanging out back stage at next week’s MMVAs. Â The network has realized that their fans are what keep the station current. Â And for me, Jesse is the culmination of Much’s new direction. Â He’s smart, he loves music and you already know, this is just one part of his adventure.