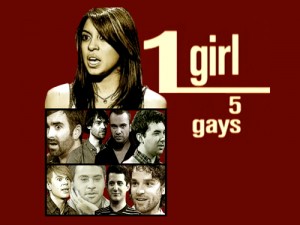 I’ll be honest: I’ve been wanting to talk about MTV Canada’s 1 Girl 5 Gays for some time. I’ve been struggling with how to talk about it without annoying somebody, somewhere, and so I’ve simply decided to just say what I’ve been thinking and then duck and take cover.

If you’ve never heard of the show, you can watch it Fridays on MTV Canada (or, inevitably, you can watch it online as well. It’s basically The View, but with Aliya-Jasmine as the moderator of five funny, honest, and sometimes brutally mean gay men as they contemplate twenty questions about love and sex.

This show is not for the faint of heart. The guys are sometimes shockingly open about their personal lives, and while it’s refreshing to have something so honest on air, I sometimes feel it’s over-the-top. Of course, some of these guys are trying to make a name for themselves: they live in Toronto, where apparently everyone wants to be an actor. Usually Aliya-Jasmine’s face mirrors what the audience is thinking: Where the hell did we find these guys?! I mean that in a good way.

Aliya-Jasmine is a pro as the moderator.Â She blushes, gushes, and shrieks, yet is able to turn around to ask the tough questions. When she gets serious, she has masterful control of the room.

I‘m assuming that at some point during the show’s development, someone asked how 1 Girl 5 Gays would affect the gay community. And honestly, I’m still not sure what it does. In some respects it’s great for the show’s male characters to have this outlet to talk about their lives and their opinions. But are they also being turned into a spectacle for the audience’s amusement? For example, many of the guys talk openly and honestly about their promiscuity.Â When panelist Juan was asked to describe the last guy he’d slept with, the best answer he could come up with was: “White”? Â While everyone else around him burst into laughter, I wondered what sort of example this was setting for the audience watching–many of whom are probably coming to terms with their own sexuality. 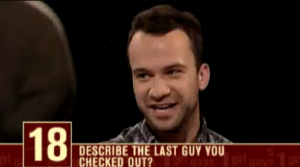 I’ve honestly asked myself dozens of times: does a show like 1 Girl 5 Gays condone or educate viewers about the issue of promiscuity in the gay community? I guess I don’t understand the point of asking five gay men, in front of a national television audience, if they like having another man play with their balls, (which was a question in this weeks episode.) If it’s because people are generally curious, fine. But if it’s because producers know they’ll get a funny “gay answer” then it’s something completely different.

And that’s not to say the show is all about being gay. This week’s episode featured great questions like “describe your relationship with God,” “would you donate your organs in the event of an unexpected death?” and “name someone that has made you cry.” To me, those are great questions that promote insightful discussion.

The closest thing Canada has ever had to a show like this was Sex, Toys and Chocolate, which aired on the Life Network (now Slice). Â It featured straight boys and girls talking about their sex lives in an open and honest fashion. But I don’t remember the questions being as personal.Â Maybe it’s just a sign of these modern times.

In the end (no pun intended), I’m happy this show is on television. I watch it every week and I think it’s important that we have access to its open and honest answers. It invokes conversation and usually lots of laughter.

I just hope we’re all laughing for the same reasons.