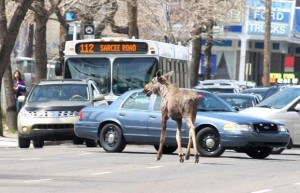 Anyone that was in and around downtown Calgary on Thursday afternoon, got the chance to see something quite rare: a moose.  The young moose spent several hours wandering all around the streets of the downtown core.  He started the morning splashing around the Bow River, but by the time he was tranquilized, he had wandered more than nine city blocks and was captured on 9th Avenue!

Since I wasn’t there it was awesome to see so many Calgarians following the story on Twitter. The hastag #moose was a trending topic in Canada for most of the afternoon! It was obvious that Twitter was integral in spreding the story.  When people first started tweeting about seeing a moose downtown, major media outlets like the Calgary Herald and CBC were left scrambling and asking anyone on Twitter to send them pictures and they were using those pictures for the story, until they could get their photographers downtown themselves!

In the end, the moose was tranquilized and released outside of the city.  Hopefully it can somehow find it’s family again.

Hey Disney, you looking for a story?