>After a two year break, I’m bringing back the 99-word review! 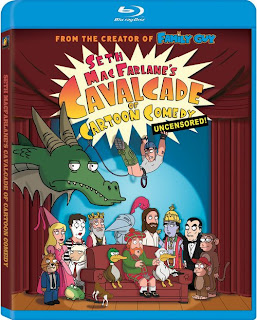 Seth MacFarlane’s Cavalcade of Cartoon Comedy:
Ever wished the Family Guy was R or X-rated? With enough vulgarity to make even me blush, this comedy hour is for McFarlane die-hards only. Â The mini-gags sting deep but are satisfying, if not disturbing. Never has the warning â€œuncensoredâ€ bared more caution. The clips are impossible to describe for fear of offending wellâ€¦.everyone.Â  Assume that everyone from Magic Johnson, little people, the first AIDS patient to Ganesh get skewered.Â  Toss in fat Jesus and mountain lion penisâ€™ and I think you have an idea of the delightful debauchery. Â Uber-disappointing special features are a buzz kill.Â