8 very easy ways to save money at The Calgary...

This post is written in partnership with The Calgary Stampede.

As the Calgary Stampede gets ready to kick off its 105th year, it’s celebrating with more deals and promotions than ever before. Â With so many ways to save money, here’s your complete run down of some of your bests for saving your bucks.

Save a few at Sneak a Peak!â€‹

Every year the Stampede kicks off with Sneak a Peak night, but it’s never looked like this before. Admission to the grounds is only $9Â , with free entry for childrenÂ 6 & under. But this year, Stampede has teamed up with Beakerhead forÂ IgNITE, which will bring together a stellar line up of some of the best DJs in Calgary to perform at the Beat Drop Stage during IgNITE. Surrounded by futuristic Beakerhead visual art installations and classic midway rides, the DJs will be bringing their club vibes to the Stampede for one night only. There will also be a silent disco!Â Through the wireless headphones that are provided by Stampede, you can tune into three different DJs! Donâ€™t like the music DJ1 is playing? Just flip a switch and see what DJ2 or DJ3 is playing – youâ€™re in control of the music! Colored LED lights let you know what your friends are listening to. Â  Attendees will also be able to purchaseÂ Ride All Night wristbands that extends access to midway rides until 1 a.m â€” all for $32, plus applicable fees.

Get in for free: Part One

The Calgary Stampede always officially kicks off with the massive parade, but this year’s has a few special surprises. Â First, they’ve changed the route. It basically goes the opposite direction as the years before. Second, you can basically follow the parade right to the Stampede grounds, where you’ll get free Admission to Stampede Park from 11AM – 1:30PM!

This year’s parade will be extra special, as the parade marshals will beÂ the seven chiefs of the Treaty 7 Nations. The Treaty 7 Nations are comprised of three Blackfoot Confederacy Nations, three Stoney Nakoda Nations and the Tsuutâ€™ina Nation, whose territories are in southern Alberta.Â The main parade starts promptly at 8:55 a.m.

Get in for free: Part Two

Cenovus Family Day is onÂ Sunday July 9, 2017, and it’s your first chance for you and your family to get in free!

The special day featuresÂ free admission into Stampede Park fromÂ 8 a.m. to 12 p.m.Â and a complementary Stampede breakfast for the first 25,000 people.Â Breakfast starts atÂ 8:30 a.m.Â and finishes atÂ 11 a.m.Â Vouchers will be distributed at Park entrances and are required to receive your complimentary breakfast. 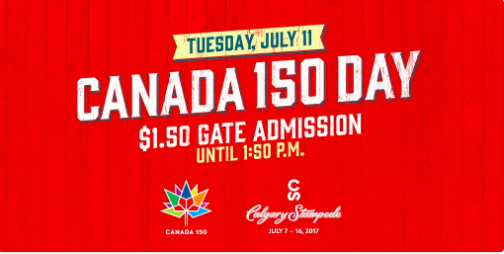 Who says you can only celebrate Canada Day once a year? Â July 11th, 2017 is officially Canada 150 Day on the Stampede grounds, and to celebrate, admission to Park is just $1.50 until 1:50 p.m. â€“ yes, all you need to join this Canadian fun is a loonie and a couple quarters!

On top of that, there will be a Stampede guests are invited to watch a live citizenship ceremony, where 50 new Canadians will be sworn in, enjoy Canada 150 birthday cake and play our countryâ€™s favourite game at multiple, interactive hockey displays â€“ whatâ€™s more Canadian than hockey? Even Olympic gold medalist from the Canadian womenâ€™s hockey team, and Sportsnet broadcaster, Cassie Campbell-Pascall will be on hand to give some hockey tips.

Get In for Free: Part Three- (Senior Edition) 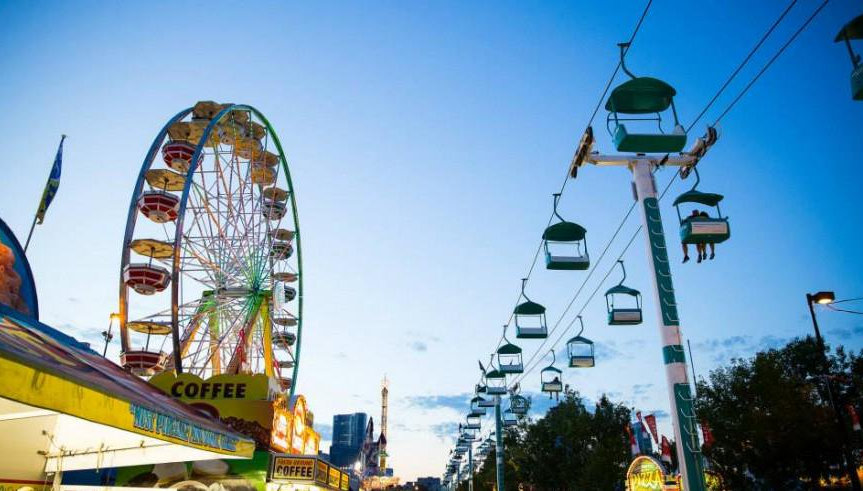 July 11th is also the day thatÂ seniors 65 years and older can celebrate the day with free admission all day, free coffee and donuts from 10 a.m. â€“ 11:30 a.m., a free WestJet Skyride and rush seating on Rodeo and Evening Show tickets. This literally makes me excited to be 65-years-old. Free donuts!

Get In Free: Part Four 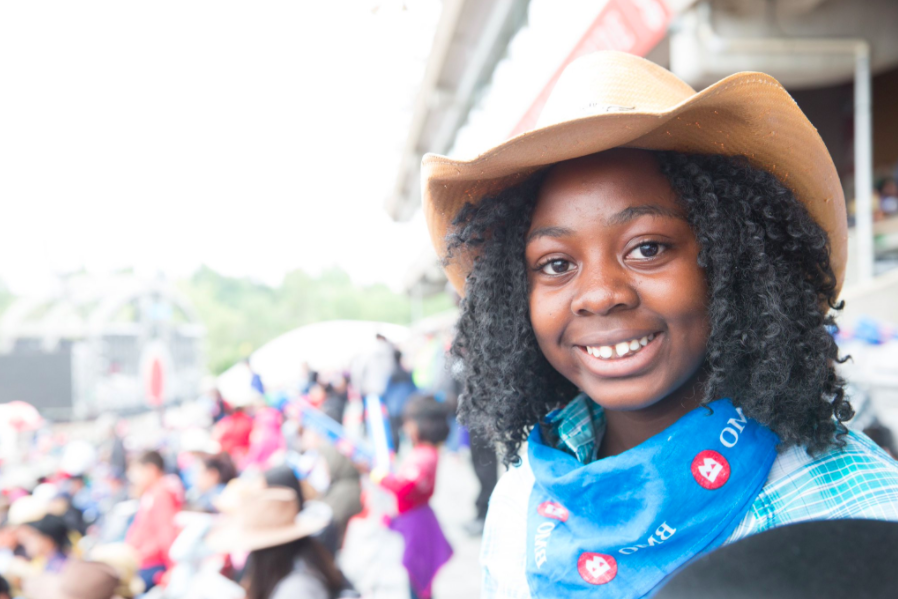 BMO Kids’ Day is Wednesday, July 12th and it’s the chance for freeÂ entry for kids 12 & under w/ adults from 7 -Â 9Â a.m. After 9:00am, it’s only $2 for entry all day for kidsÂ 12 & under. Â Now it would be crazy if you stayed with your kids from 7am and waited for the evening grandstand show, so the Stampede sets up a sort of mini Grandstand variety from 8am to 10am. Families will also get free breakfast (while quantities last) in the Grandstand Courtyard from 8:00am to 9:30am. Plus,Â BMO Kids’ Day Midway coupons are specially priced all day (30 coupons for $22).

Shake Your Way In!

Throughout Stampede there’s a few great music festivals like the Oxford Stomp and The Roundup, there’s also the Stampede Shaker, which will features musicians Tom Cochrane, Sloan, Trooper and Steven Page. Tickets are only $29, and it comes with free entry the next day to the Stampede grounds! Â That’s probably one of the best deals throughout all of Stampede!

Leave The Car At Home 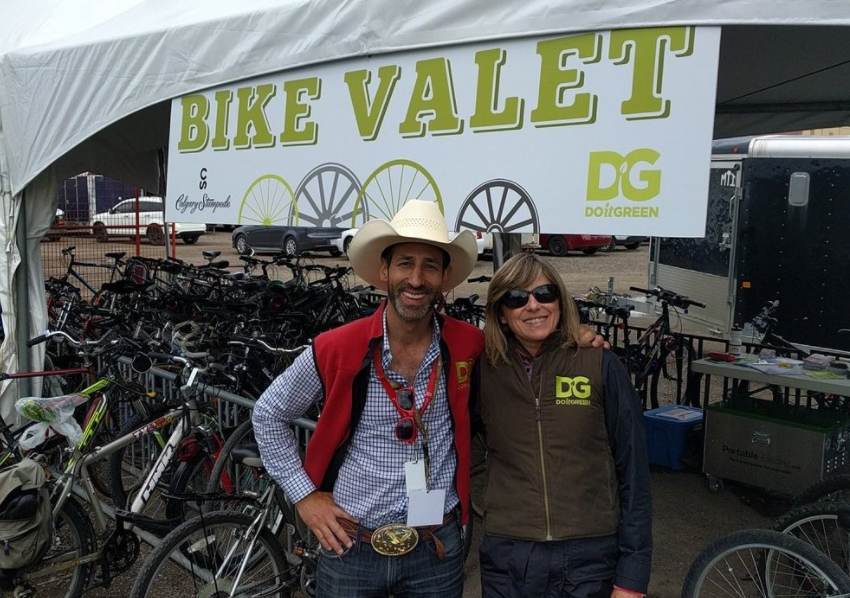 Now you might think might be hard to leave the car at home, but in fact, in the last couple of years, it’s become easier and easier to find new ways of saving on parking. First things first, there’s of course the CTrain, which runs 24 hours during Stampede, and there’s two stops right at the grounds. Â Calgary’s amazing cycletrack just happens to pass right beside the grounds too. So your family can bike to the grounds, lock your bike up at the Bike ValetÂ and save a bunch of money that way. Â And then there’s the car2go Ranch, which offers free and easy parking. The car2go Ranch is located at 620 â€“ 13th Ave SE (@ 5th St) and will be available all day, every day, from July 7 th – 16 th. If you don’t have a membership yet, you can use HOWDY to get free registration and $10 credit.