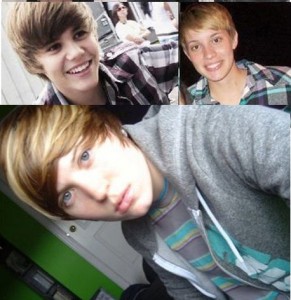 Here’s a fun story for a Friday!

Last weekend in Maryland police thought they caught 16-year-old Justin Bieber drinking in a bar.  Someone had reported seeing the teen there and when the police came they immedialty Justin.

The only problem was that it wasn’t Justin.  Instead it was a 27-year-old female named Kate.  (Justin was actually in the Bahamas.)

For me, this story  highlights the international epidemic that is Justin Bieber’s hair.  Not only is he eventually going to break his own neck if he keeps flicking it back all the time, lesbians are running out of places to sit and enjoy a beer.

Now calm down, I’m not saying that Kate is a lesbian.  I’m assuming it and using the hilarious website Lesbians Who Look Like Justin Bieber as my main piece of evidence.

So who is it going to be?  Who is going to cave?  And of course by cave I mean, get a haircut.  This can’t go on. This is ruining our society.  Children are going to grow up thinking that woman are teen hearthrobes and teen hearthrobes are…well, let’s be honest, Justin Bieber could very well be a woman.

Then again, the lesbians don’t seem to mind, after all now they get to make funny music videos about it!