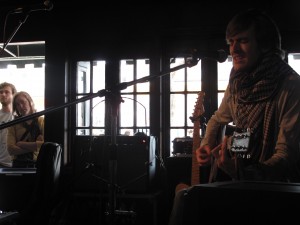 On Sunday afternoon, I got the unique opportunity to be a judge for the 2010 Ship & Anchor and Calgary Folk Music Festival Sonwriting Contest Finals. Throughout the afternoon, we got the chance to listen to 17 of Alberta’s best up and coming songwriters.

I’ll be honest, I didn’t love all of the songs. But I’ve always had so much respect for those that can write songs, mostly because it is something that I definitely cannot do.

In the end, the judges had a tough time picking the winner, we deliberated over the top three spots for quite sometime. Â After talking about it for almost an hour, we decided the $2000 top prize belonged to Christopher Austman.

If you want to know why he won, just take a listen to songs on Facebook. Â Anyone that can get the often rowdy Ship and Anchor audience to shut up and listen, easily deserves the top prize.

But Chris certainly had some competition.Â Clea Foofat nearly won and ended up going home with the second place prize and third place went to Jared Klok.

It was seriously an amazing and refreshing afternoon of great music. Â I felt privilegded enough to even listen to it, let alone judge it.

Take a look at all the winners!