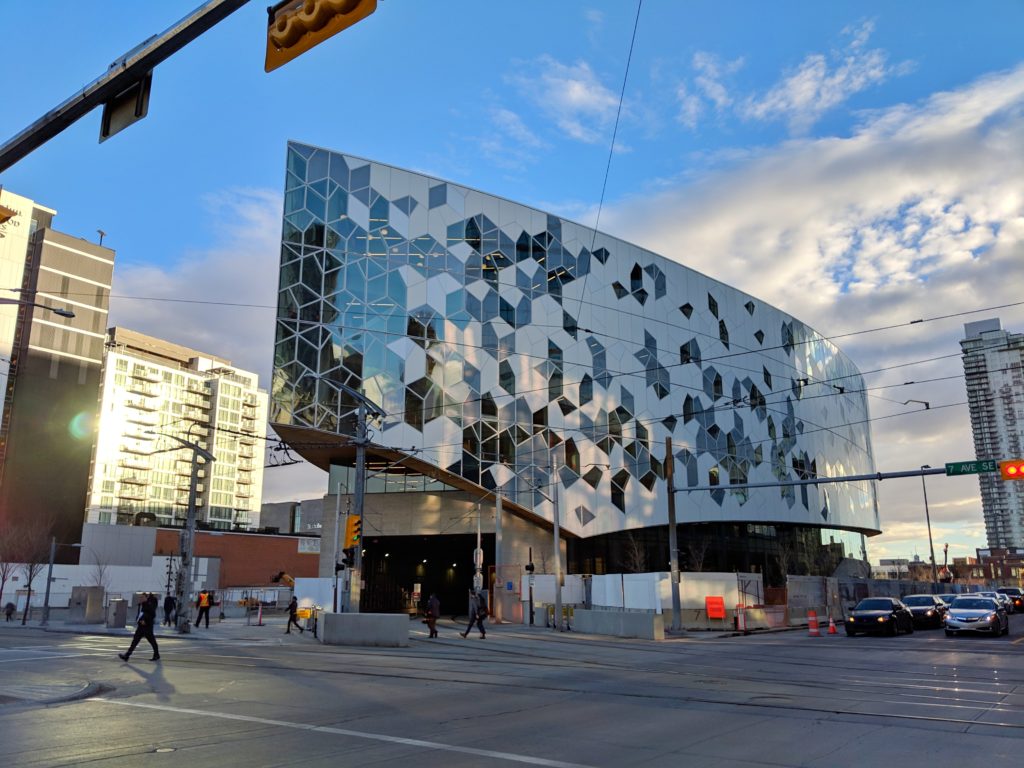 And, well folks, today is that day. As of November 1st, Calgarians have a new library and not only will it blow you away, it will be the envy of people around the world.

A few days ago, I was super lucky enough to get a tour of the space and let me tell you, this is not your grandma’s library. Calgary’s new Central Library is stunning perfection in every direction and will require you to return many times over, just to try and begin to explore all it has to offer.

With that in mind, here are ten WTF things that I can’t wait for you to see! 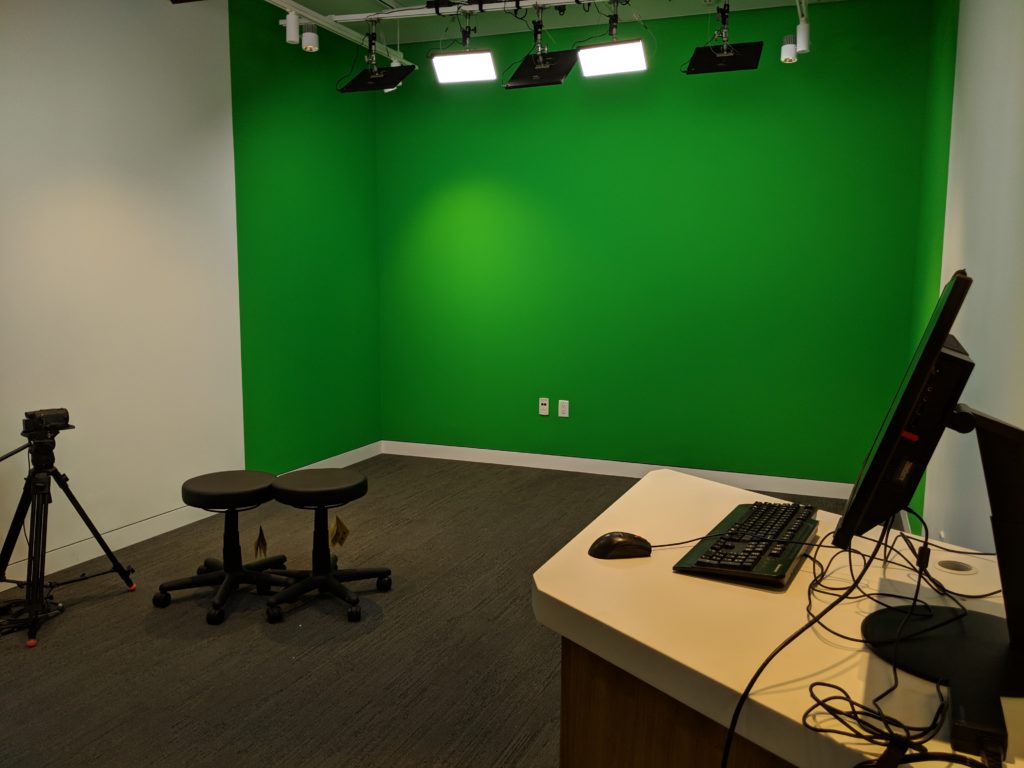 The audio recording studio, video recording studio and production studios are all free to use for library members. (Remember, memberships are free.)Â  Now you can try out that podcast or YouTube channel with professional equipment. I think this is the thing I’m most looking forward. 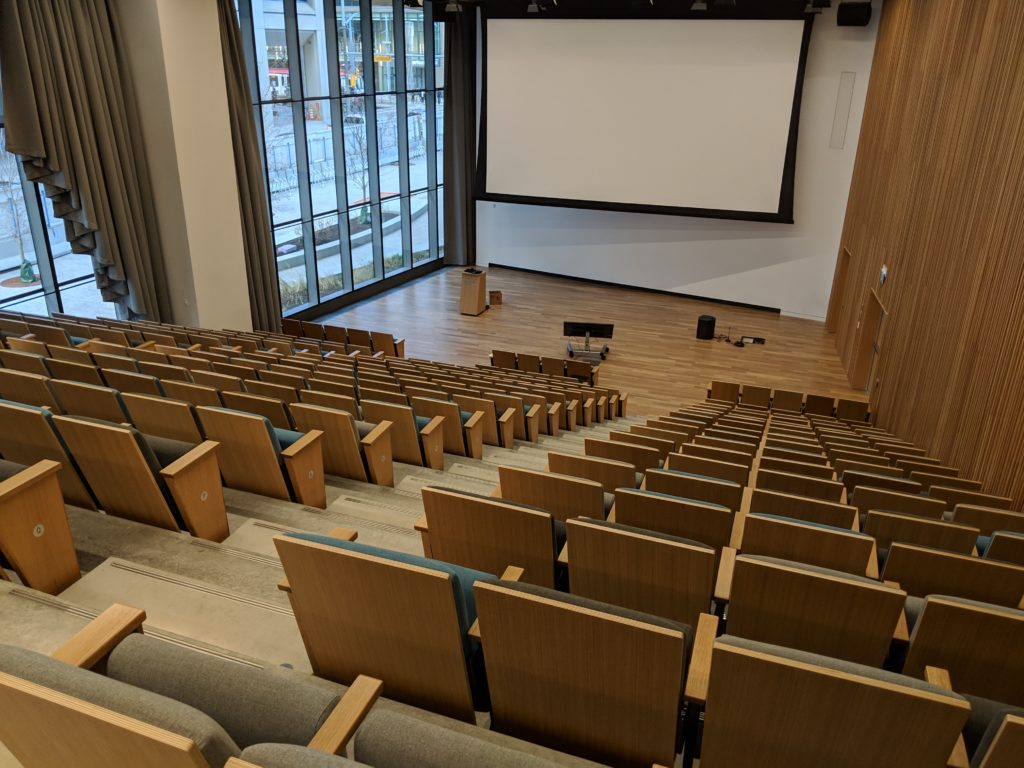 There’s lots of theatre spaces in Calgary, but it’s nice to have a new one at the range of 300 to 400 people, outfitted with all the new technology that makes putting on events way easier.Â  Â For non-profit groups, it costs $60 an hour to rent. And for profit, it’s $160. 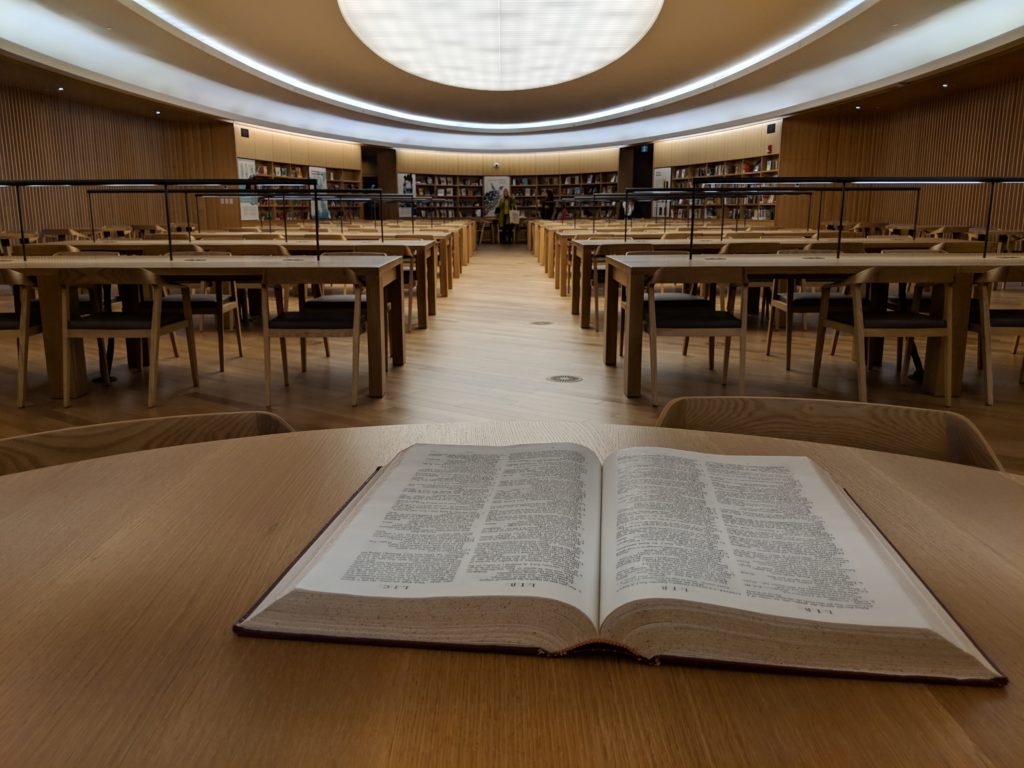 This room has to be seen to be believed, but I think the title gives it away. It really is a great room to read in.Â  Reminds me of The Rose Main Reading Room in New York City but with a mid-century modern flare. 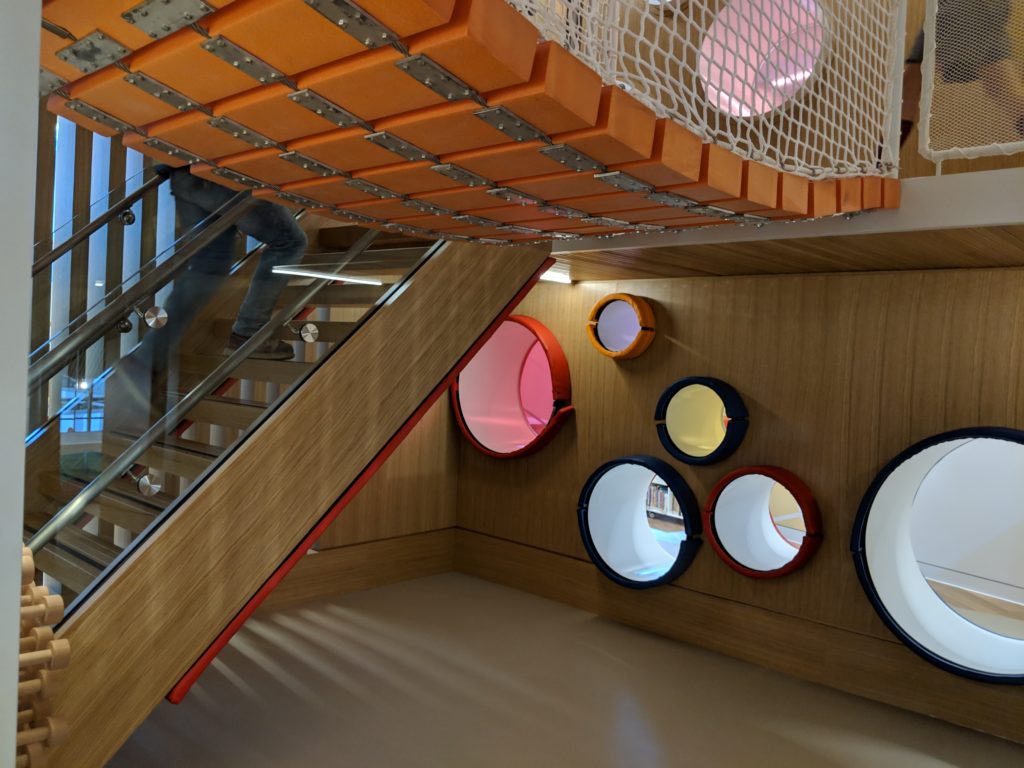 It’s no secret that the library is a popular destination for families and I think they are going to be blown away when they see the children’s library, complete with an Early Learning Centre, Nursing Room, Toddler Nook and more importantly, a jungle gym for kids to let loose.Â  Now, I won’t ever be allowed in there, so you better believe I took the chance to before the library opened! 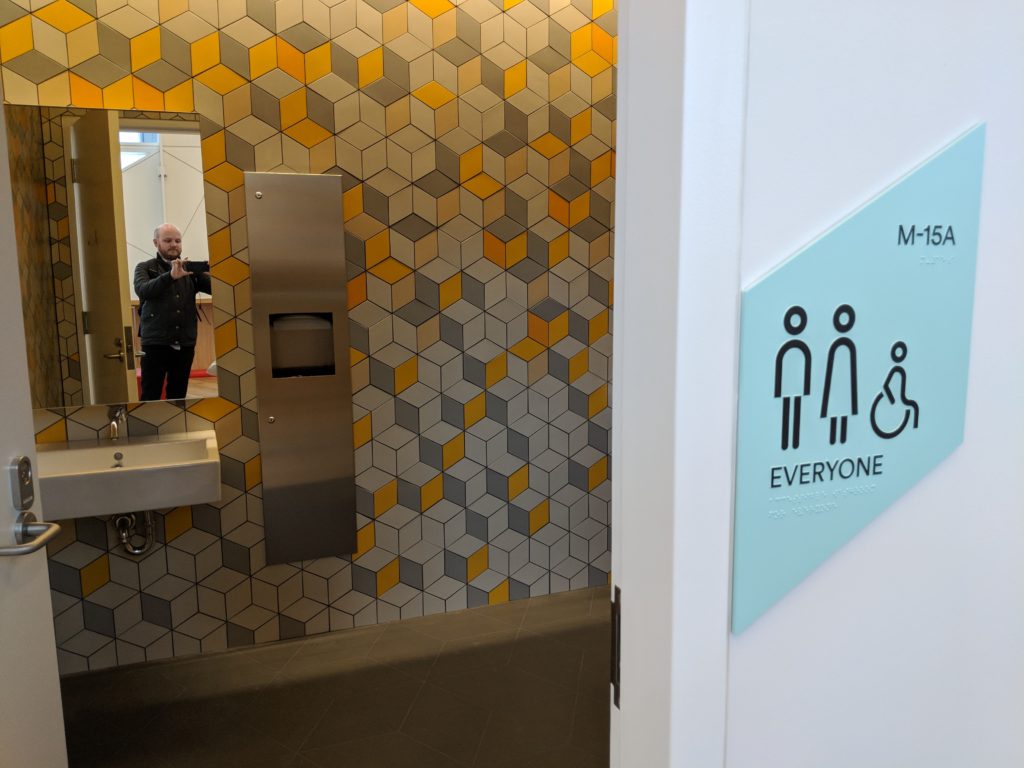 I don’t know why, but bathrooms are always a big deal to me and the library’s were one of the first things I wanted to see. I was so happy to that they weren’t all gendered, and that they are all accessible. 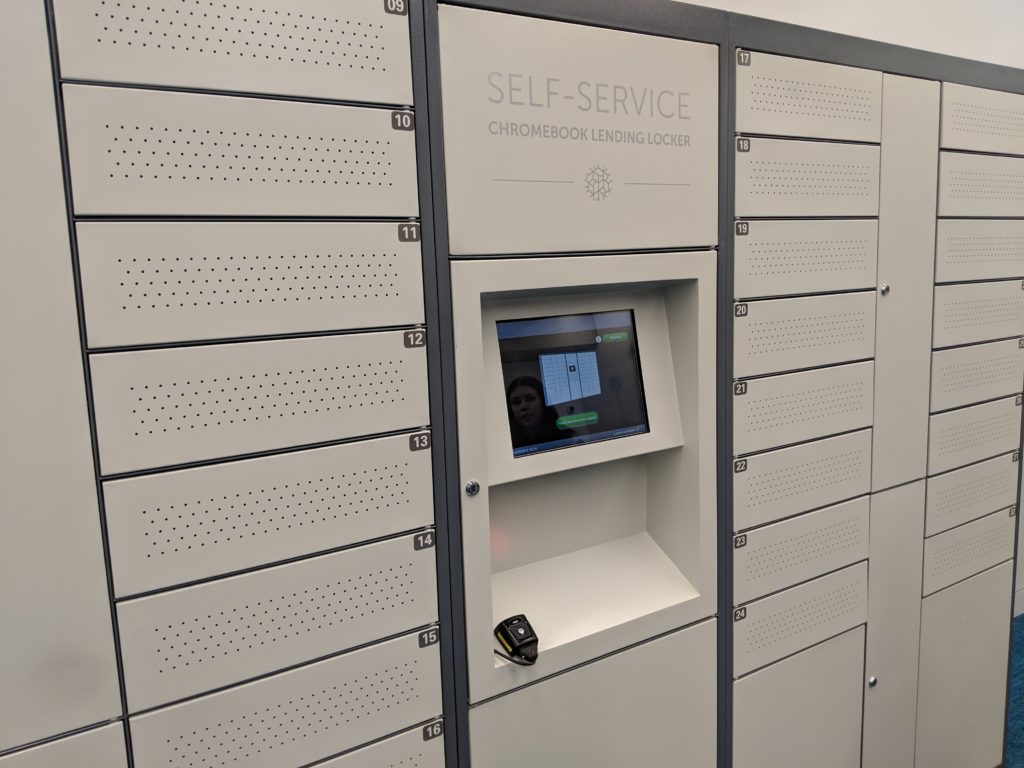 Up until a few months ago, I definitely took for granted people’s access to technology. But then I started working from the Central Memorial Park Library and saw how many people came in just to borrow a laptop.Â  So this new feature is actually incredible.Â  Free access to chrome books opens up technology to so many different types of people and their needs. I honestly got a bit teary-eyed when I saw this. 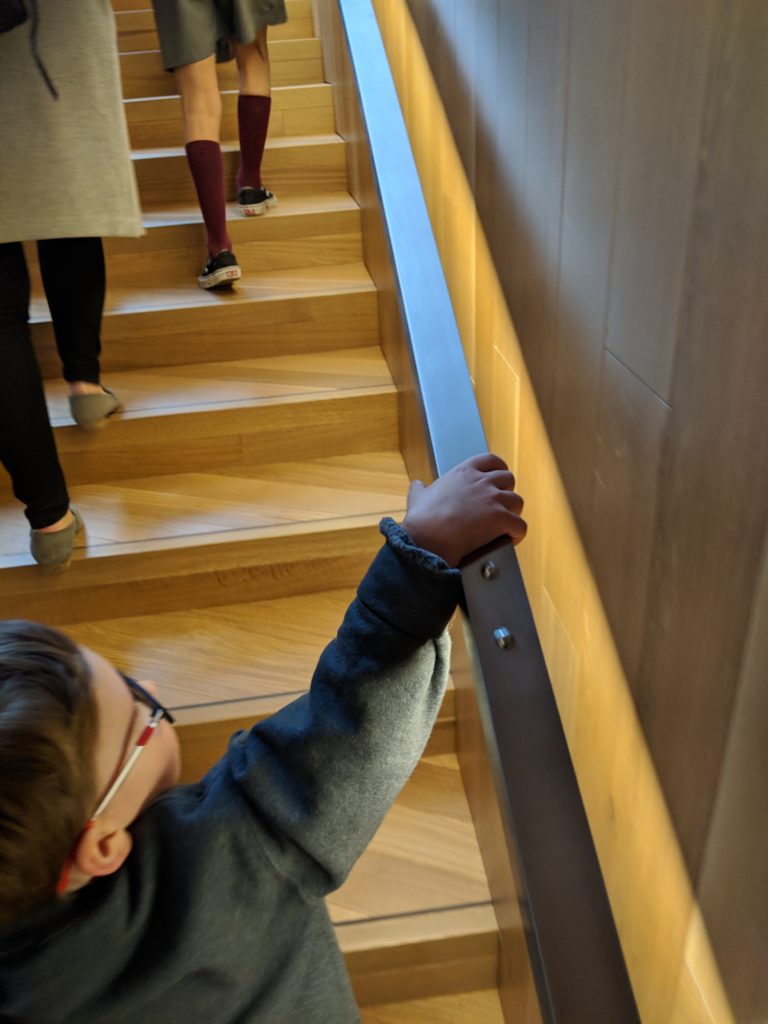 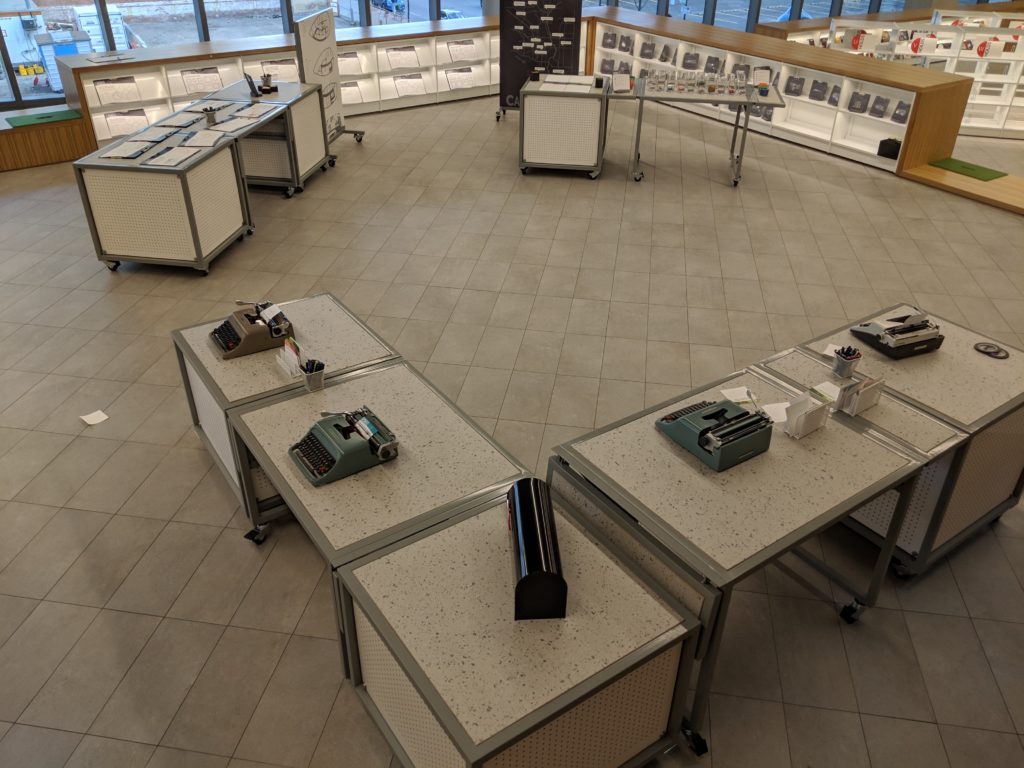 Walking in the front doors of the library, one of the first things you’ll see is the library’s new Create Space, which allows people to tell, share and read stories using different mediums, even typewriters! 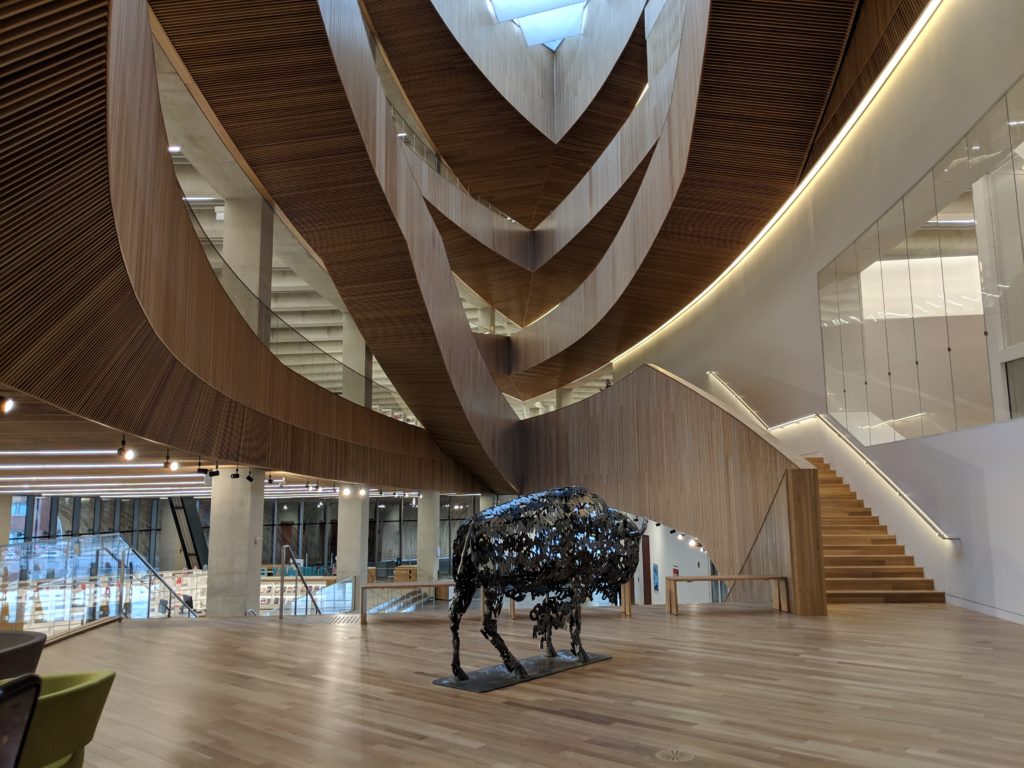 Indigenous art and artists are celebrated and honoured throughout the new library with eight twenty-foot murals,Â furniture in the Eldersâ€™ Guidance Circle area andÂ a life-sized bison sculpture made out of metal by Lionel Peyachew.Â  The art is part of the $500,000 Indigenous Placemaking project, funded by Calgary Public Library Foundation. 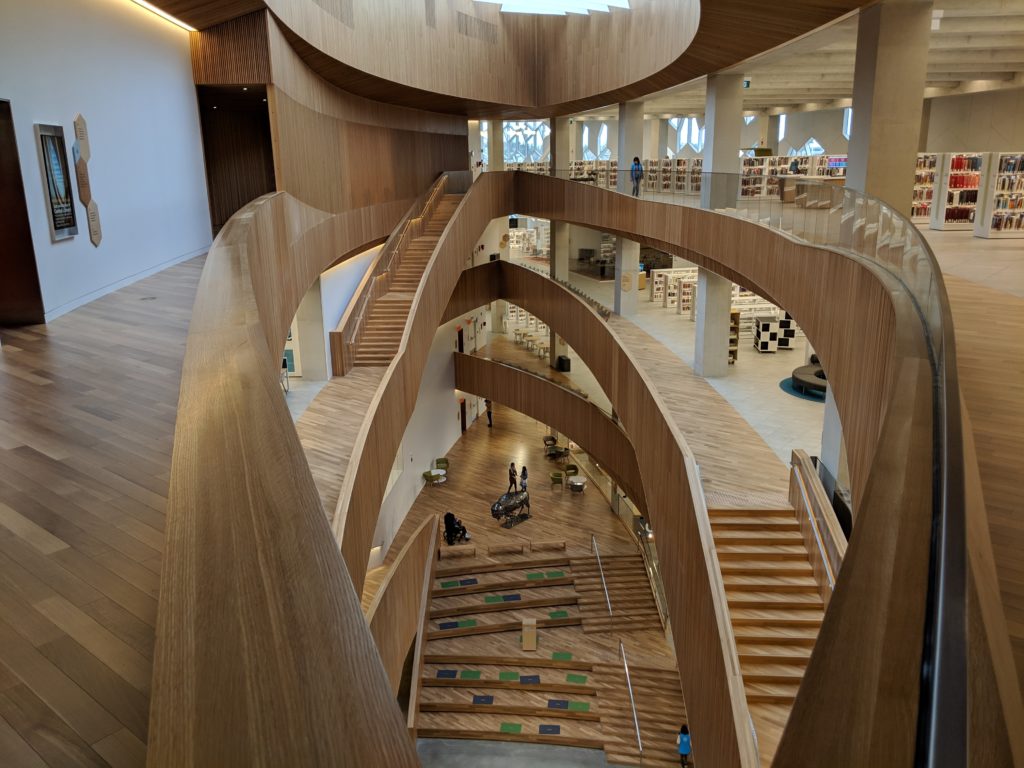 Here’s the thing with this library and its design, I don’t think you’ll ever get the same photo twice. Between the light, the angles and the different levels, the new library will not only be a treat for your mind, but also your eyes.